The experience of Bulgarian companies and the achievements of our mining industry were presented by the Minister of Economy and Industry Nikola Stoyanov during the international conference ‘Future Minerals Forum’. This is one of the most significant economic events in the Middle East and is expected to be the largest global forum in the mining industry for 2023.

‘Bulgaria reaches a peak in mineral extraction in 2021 with a steady growth of 10%,’ Nikola Stoyanov stressed during a ministerial round table, part of the forum. According to him, our production is 117 million tons and Bulgaria is among the leading countries in Europe in terms of extraction of some basic raw materials such as copper, lignite, etc. ‘Over the years, we have consistently developed specialists who are leaders in their field, and Bulgarian companies in the sector are competitive at the global level,’ the economy minister stressed. 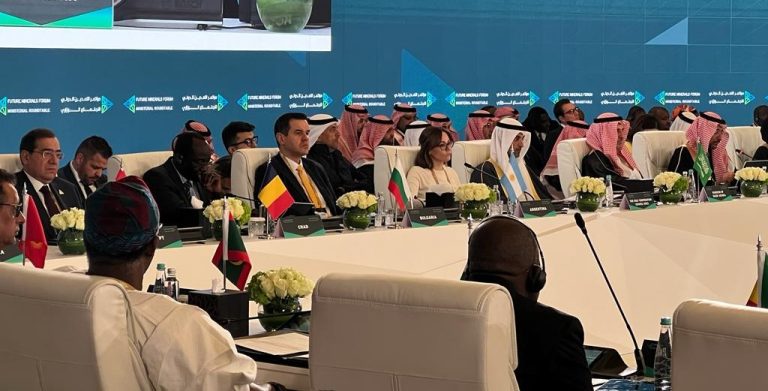 He invited the ministers and officials from over 60 countries participating in the forum for joint projects in the mining industry with the participation of the Bulgarian business. ‘I would like to take this opportunity to thank for the invitation to our hosts from Saudi Arabia, with whom we have already had concrete talks on including our companies in the projects they are working on’ Minister Stoyanov further said. He explained that two months ago they started talks with the Arab country, which will continue in the coming days, including with business representatives from both countries.

‘The Future Minerals Forum’ is organised by the Ministry of Industry and Mineral Resources and the Public Investment Fund of the Kingdom of Saudi Arabia and was opened by the Minister of Industry and Mineral Resources, Bandar bin Ibrahim Al-Khoraif. A major theme on the first day of the event is the growing need for raw materials globally and the need for new sources of supply. The three-day conference, taking place from 10—12 January in Riyadh, is expected to attract about 6,000 participants from around the world, including more than 100 dignitaries, representatives from industry, business, government and academia, among others.

Minister Stoyanov’s visit to the country is a continuation of his October 2022 visit to deepen talks on several identified partnership initiatives and opportunities to attract investment.