A joint project with the state-owned LB Bulgaricum is being prepared and the finished product will be exported to the Gulf as a priority.

Saudi Arabia is interested in a joint investment in the construction of a dairy farm in Bulgaria, with the potential for it to become the largest in the country and the region. The milk produced will be processed entirely in our country and the products will be export oriented to the Gulf region. This became clear during a meeting between the Minister of Economy and Industry Nikola Stoyanov and the management of one of the largest companies in Saudi Arabia in the food industry. The meeting was also attended by Nevena Petrova, Chairman of the Board of Directors of LB Bulgaricum, who presented the Bulgarian company and its products.

The Saudi company currently also runs a farm with about 190 thousand cows — approximately the same number as all registered cows in Bulgaria. An exchange of experience and joint investment between them and LB Bulgaricum is the project on which the work has started. Representatives of the company are expected to visit us to detail parameters and discuss specific options.

‘Bulgaria has an interest in attracting a strategic partner that will enable us to regain markets we are familiar with but have lost over the years,’ Minister Nikola Stoyanov stressed. Bulgarian dairy foods, and cheese in particular, were a favourite product for a large part of the local population, it became clear during the meeting. In an attempt to revive this tradition, the company has started selling cheese under the brand name ‘Bulgaria’ in Saudi Arabia and the region. According to their data, the production made in Bulgaria is gaining a growing market share in the Gulf. Building a joint farm with LB Bulgaricum and starting joint production is an opportunity to both expand the Saudi company’s presence in the region and to gain a foothold in the single European market.

Saudi Arabia is also interested in investing in the construction of a cargo airport in the country. This was discussed during a meeting with the management of the National Industrial Development and Logistics Program (NIDLP). On the Bulgarian side the ministers Nikola Stoyanov and Alexander Pulev participated. NIDLP is an institution of importance to Saudi Arabia’s economy that aims to transform the country into a leading industrial and global logistics hub by maximizing the value of its mining and energy sectors.

Minister Nikola Stoyanov presented to them a project for the development of Haskovo Airport, but emphasized that there are other potential locations. The Fund has expressed interest in exploring projects that, in addition to an airport, allow for the construction of an industrial zone. The Bulgarian ministers invited the Fund’s representatives to visit the country to learn about the investment opportunities on the ground, which is expected to take place in the first half of 2023. Minister Alexander Pulev focused on Bulgarian companies in the field of information and communication technologies and innovation. Common projects in these sectors were discussed.

Ministers Nikola Stoyanov and Alexander Pulev were also received by Prince Khalid bin Salman bin Abdulaziz Al Saud, brother of the Saudi Crown Prince and Minister of Energy. Together with the opportunities for joint projects in the energy sector, the meeting also discussed cooperation in the economic sector. Both sides agreed that in recent months there has been a serious increase in the intensity of cooperation between them. If this dialogue continues at the same pace, the launch of serious investment projects between the two countries is expected in the short term. 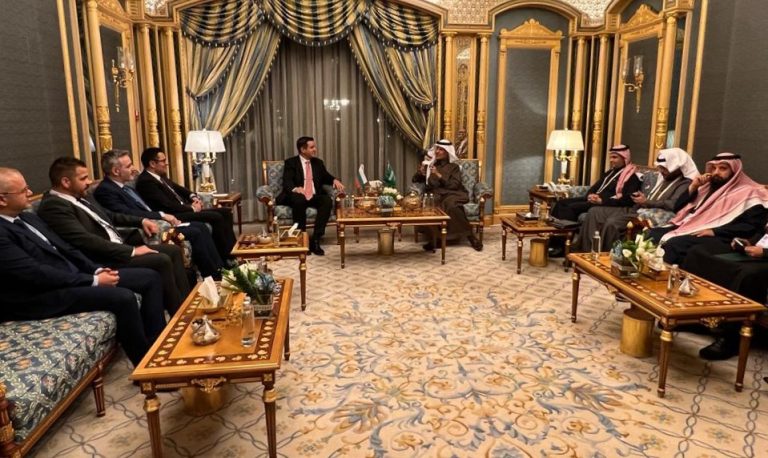